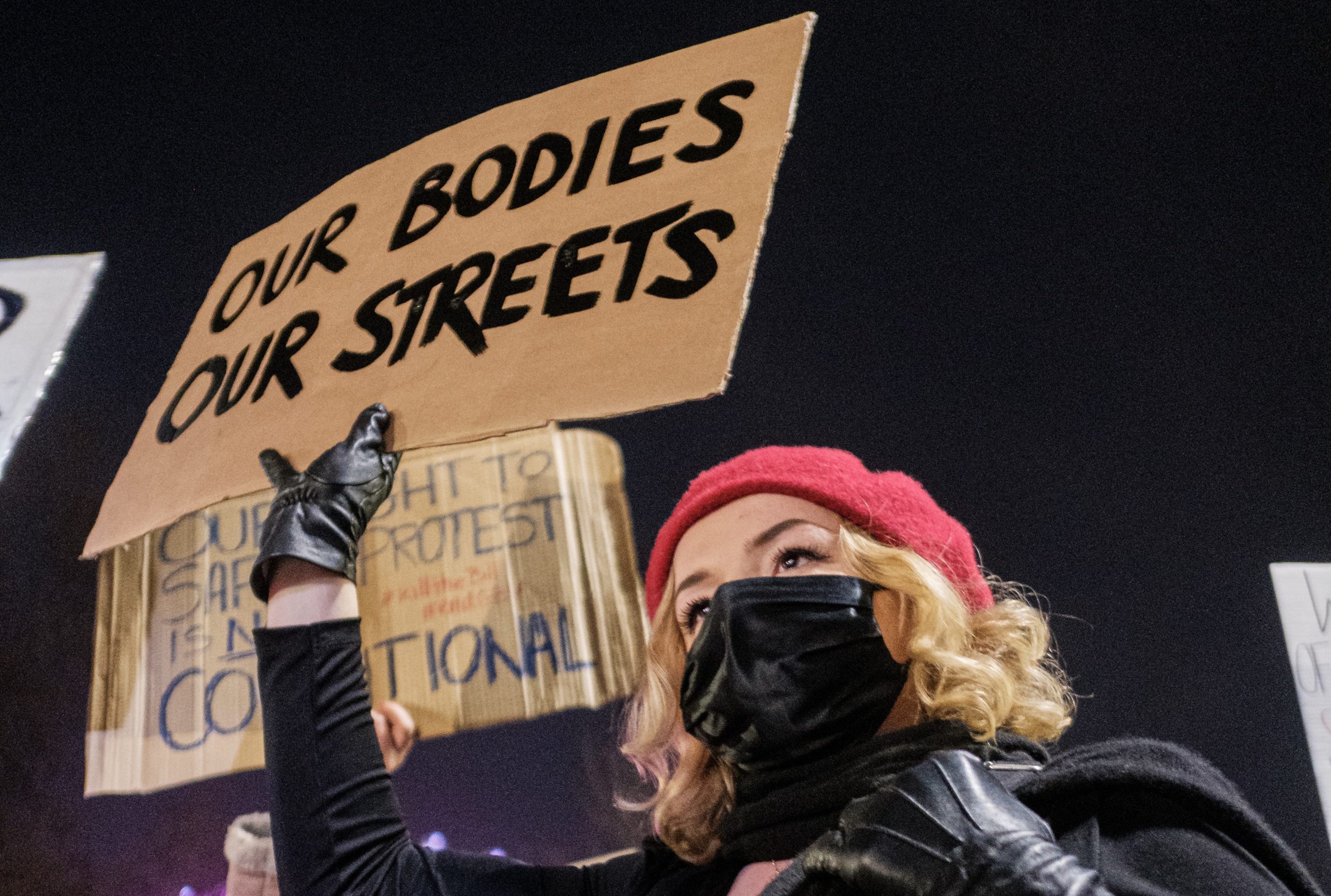 Sarah Everard, a 33-year-old woman, was walking back to her house on the evening of 3 March 2021 after visiting a friend in Clapham Common.

She never made it home.

This particular case, which ended up with Metropolitan Police officer Wayne Couzens pleading guilty to her rape and kidnap on 8 June, is unique in many ways but tragically not an isolated one. It shed light on two major issues: women’s safety and loss of trust in the police. Both before and after the murder, women from all over the world have shared their daily challenges: from refusing to go to a party to holding keys in their fists, or even making sure to walk home in a group. The loss of the feeling of safety at home, on the streets and on public transportation, coupled with the lack of effective strategies to address the causes, only reinforces the urgency of addressing the problem.

According to a study led by UN Women published in March 2021, almost one in three women have experienced sexual violence (including intimate partner violence) at least once in their lifetime. According to the same organisation, in the UK alone, 71% women of all ages have experienced some form of sexual harassment in a public space, increasing to 86% among 18-24 year-olds. The Covid-19 pandemic, which has seen a 25% increase in calls to domestic violence helplines, has shown that many women are unsafe not only on the street or in public, but also in their own homes.

In response to Sarah Everard’s rape and murder, the UCL Department of Security and Crime Science held a webinar on 30 June to discuss crimes against women and possible solutions. The event aimed to gather the expertise and insights offered by the discipline of crime science and invite young crime scientists (ranging across BSc, MSc, and PhD students) to utilise their knowledge and discuss possible innovative countermeasures.

The event, bringing together 69 attendees (including both students and lecturers) from the UCL Faculty of Engineering, was initiated and moderated by MSc Countering Organised Crime and Terrorism student Oona Prieur. Panellists comprised of police officers and researchers from both UCL and the University of Exeter, with backgrounds including policing, law, cybercrime, philosophy, psychology and political theory.

The importance of cultivating curiosity

Though they may seem insignificant at face value, small conversations and changes in behaviour can help make a big difference to ensuring a better understanding and perception of safety. Cultivating curiosity, humility and vulnerability can go a long way in helping to create spaces for women to express themselves and their thoughts. This can inspire changes in behaviour and a wider understanding about the issues faced by women in contemporary society, even if these issues are not immediately understandable or relatable.

Related to this, there is room for wider discussions on the roles of power, patriarchy misogyny, agency and entitlement. This may be useful for understanding how such notions might affect the way we collect, conduct and understand legal or empirical work related to women’s rights issues. Problematic environments, particularly families and social networks that condone abuse against women, were discussed to be a key root of the problem.

So how can awareness on these issues be raised and such environments be addressed? Social media potentially offers a great tool for both endeavours – Facebook groups and creative media channels have already shown that awareness on previously taboo or misunderstood subjects can be raised in original and relatable ways. However, content creators need to be careful – what is inferred from content, particularly on sensitive topics such as these, can vary according to the audience that is targeted.

The internet can be of great help but also a hinderance – in the case of Sarah Everard, social media (and the media itself) was influential in making missing posters viral. However, while the case was unique, other cases – particularly involving women of colour – have not gathered as much attention despite being as significant of a problem. The culture and practices of social media, and the wider media, need to adapt and address engrained biases that cause this imbalance.

It is no secret that prosecutions for rape have drastically fallen in the UK, with senior government ministers acknowledging that more needs to be done. In the year leading up to March 2020, only 1.4% of recorded rape claims resulted in charges. These concerning statistics are underpinned by numerous structural deficiencies in the legal and policing system, including a lack of up-to-date laws, evidential difficulties and a lack of resources available to law enforcement.

From a legislative perspective, laws relating to online abuse are lagging behind. The physical world and digital world are two sides of the same coin – in theory, users should not commit any action in their digital life that they would not commit in their physical life. However, the anonymity offered by the World Wide Web has meant that particularly for offenders, this is not the case. Legal procedures therefore need to be updated and distinct from established laws governing the physical realm, so that cyber-enabled abuse, such as the uploading of intimate videos without consent, can be detected and prevented effectively.

Evidential difficulties arise for numerous reasons. Proving the lack of consent is an immensely difficult task and is a major reason why rape victims often choose not to come forward. However, a recent change in Sweden’s rape laws, where prosecutors no longer need to explicitly prove the absence of consent, led to the number of rape convictions rising by 75% in 2019. Other countries, many of which are yet to propose updated laws, have been urged to follow suit.

Other sources of potential evidence are also made harder to access due to logistical difficulties. CCTV footage, which is often crucial for charging offenders, is usually deleted after a short period of storage. This means that by the time a detective has been assigned a case and begins an investigation, crucial evidence may no longer be accessible. The wider issue of police cuts, which have contributed to these delays, was also highlighted as a problem throughout the webinar.

Analyses of evidence constitute a resource-intensive and time-consuming process for abuse cases. One telephone device, for example, can generate up to 40,000 pages of data – including photos, messages and online activity. Analysing such data at scale is a feat that can, as panellists have highlighted, be made easier through the use of innovative technologies, the wider use of which can benefit many stakeholders in the field of prevention.

Innovative prevention could be a game-changer

Crime science is a unique multidisciplinary approach that emphasises the role of environmental factors in causing and preventing crime. Situational crime prevention, for example, is a framework that utilises changes to an immediate environment to increase the risks, effort and costs of committing an offence, while reducing the provocations and foreseen rewards. These strategies, if implemented successfully, have the crucial advantage of preventing sexual abuse from occurring in the first place, rather than attempting to address the crime after it has happened.

New technologies and social campaigns are already being used to harness such concepts and prevent abuse against women in public places. ‘Ask for Angela’, for example, is an initiative increasingly being adopted in pubs, bars and the wider night-time economy, inviting customers or individuals concerned about their welfare to come forward and seek assistance from staff using a code-word (‘Angela’). Further adoption of such schemes, coupled with better training of employees in the night-time economy, are needed to increase the risks of detection for possible offenders, and thereby deter them.

Technology-based solutions are also becoming available to solve the evidential and investigatory difficulties faced by law enforcement. For example, apps that allow witnesses to upload photographic evidence for direct access by the police can significantly reduce the time-consuming and resource-intensive nature of abuse investigations. Such resource-pooling initiatives can significantly reduce the time and costs of sifting through volumes of data by allowing detectives to hone into what is potentially the strongest evidence available.

Situational approaches need not always involve physical interventions. Increasing empathy through sex education and active bystander training (at schools and universities) are crucial to ensure safer spaces for women to speak openly, feel secure and enjoy their life without the threat of abuse. Several universities, including UCL, are already making such training compulsory for staff and students. Such interventions can encourage empathy and a change of narrative on a wider scale. Similar at-scale interventions to increase risks facing offenders have been observed in other circumstances, such as combatting racism in football, from which lessons can be drawn and successful strategies extended.

The webinar proved to be an extremely insightful and informative event, both shedding light on the problems faced by women and offering concrete solutions derived from the fields of crime science, law and philosophy.

We strongly encourage further such events across different universities and fields of expertise to foster further open discussion, as even small conversations can have a significant positive impact. By engaging in these discussions and implementing innovative prevention measures, we can all contribute to ensuring that the case of Sarah Everard – and countless other victims – will never be repeated again. 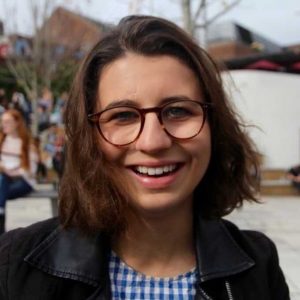 Messed Up! 10: Patricio Estevez-Soto on finding a job through rejections

Messed Up! 11: Vaseem Khan on the most common PhD pitfalls

Messed Up! 12: Alina Ristea on adapting to new environments

Messed Up! 14: David Suber on adapting to the realities of fieldwork

Messed Up! 15: Mohammed Almazrouei on coping with stress in PhD research